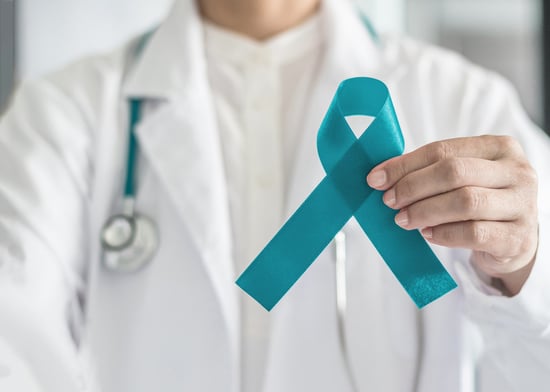 March 7, 2019 was PCOS Advocacy Day, a day that turned Washington DC teal (yes, greenish blue) in recognition of Polycystic Ovary Syndrome (PCOS). It was a day where awareness was raised and funding was requested for relevant research on a complex syndrome that 1 in 5 women face, with more diagnoses occurring every day.

First, from the beginning, what exactly is PCOS?

PCOS is a complex health syndrome that has both reproductive and metabolic implications and may affect up to 21% or one in five patients worldwide.

According to Dr. Ilana Ressler, “PCOS goes undiagnosed in 50%-70% of women who have the condition. Managing PCOS can be transformational and help patients avoid major medical conditions such as heart disease, endometrial cancer, and infertility.

Polycystic Ovary Syndrome (PCOS) is caused by an imbalance of reproductive hormones and is considered the most common hormonal (endocrine) condition in women. PCOS is also a metabolic disorder which can include; insulin resistance, inflammation and androgen excess, all thought to be potential contributing factors in the development, symptoms and severity of polycystic ovary syndrome.

2 other key features of PCOS are:

PCOS is called a syndrome, as opposed to an illness or disease because it manifests itself through a group of signs and symptoms that can occur in any combination, rather than having one known cause or presentation. A patient may or may not have all of them but instead could display two or three that can vary in presence and severity. This is why all too often PCOS may be misdiagnosed or go undiagnosed for years.

How Are PCOS and Infertility Connected?

Trying to conceive? PCOS the number one cause of anovulatory (no ovulation) infertility in women but can also be a precursor to many other serious health conditions as well, including heart disease, diabetes, stroke and endometrial cancer.

Joshua Hurwitz, MD offers this advice, “The symptom that brings most women to see a fertility specialist is irregular menstrual periods. If you are having fewer than 4-6 menstrual periods per year, you should have the lining of your uterus evaluated for overgrowth, a condition known as endometrial hyperplasia. You should also have a fasting sugar test to make sure you do not have a pre-diabetic condition called Insulin-Resistance that is common in patients with PCOS.

Additionally, cholesterol levels and blood pressure should be checked regularly.  It is also important to maintain a routine of diet and exercise.  Many studies have shown an improvement in every aspect of PCOS with a sustained loss of 5-10% of your body weight, regardless of your starting weight.” Because PCOS is a metabolic, hormonal disorder, many women don’t ovulate or menstruate regularly, causing serious problems such as:

With PCOS many have irregular menstrual cycles:

If a teenager is lucky enough to be diagnosed early, often the treatment for PCOS is birth control pills. And while that helps alleviate PCOS symptoms, for women trying to conceive, it's obviously an inappropriate treatment.   PCOS is challenging during fertility treatment, as there is often a hyper response to even the lowest doses of infertility medications. One disappointing aspect of fertility treatment cycles with PCOS, is that the cycle will sometimes need to be cancelled, due to either hyper or low response to the fertility medications.

Other health challenges associated with PCOS, include:

Why is PCOS Hard to Diagnose?

The fact that symptoms and the severity of symptoms can vary from patient to patient means some doctors are not seeing the big picture. They will look at symptoms individually rather than collectively and direct treatment to these specific issues only. On average, patients with PCOS see two to three doctors and it takes two to three years to be properly diagnosed. We need to overcome diagnostic barriers to ensure ALL patients are being screened properly for PCOS...

What needs to change?

PCOS is one of the most underserved women's health issues today. Although new estimates are claiming 1 in 5 women have PCOS less than 0.1% of NIH (National Institutes of Health) funding is allocated to research, education and support for the syndrome. During PCOS Advocacy Day, The House of Representatives were asked to support HRes146 (House Resolution) to recognize September as a National PCOS Awareness Month and to introduce a bill to address the lack of funding for PCOS research.

Likewise, PCOS Challenge and advocates asked The Senate to support a resolution for September, as well. Thank you to Representatives David Scott and Roger Marshall for being PCOS champions and introducing the bills into the House.

Women in the media and the arts, have been using their voices to amplify the conversation around PCOS. Two attended #PCOSAwarenessDay, sharing their stories with the other advocates and their legislators. Lauren Ash, spoke out that despite her “privilege” of affording good health insurance, she went undiagnosed, and therefore untreated, for years. Maci Bookout, from MTV and Teenage Mom, had this to say “I traded symptoms for side effects”, regarding the lack of reliable, helpful and effective tools to combat PCOS symptoms and related health problems.

Diana D’Amelio, RMA of Connecticut’s Physician’s Assistant (PA) and Lisa Rosenthal (Patient Advocate at RMA of Connecticut)  travelled down to Washington to help deliver the messages (big call out to CT State legislators, Senators Richard Blumenthal and Chris Murphy and Congresspeople Jim Himes, Johanna Hayes, who took the time to meet with Diana and Lisa).

Yes, it’s about awareness- every meeting with a legislator included an ask for co-sponsorship for these resolutions that will proclaim September PCOS Awareness Month. Last year, Senator Richard Blumenthal of Connecticut introduced the bill- we’re certainly hoping he’ll sponsor it again this year.

Ms. D’Amelio shared her professional expertise on video with PCOS Advocate and WJBF reporter Renetta DuBose, "It would help to have more research to diagnose exactly where PCOS comes from.  We know there is a genetic component, but we don't know exactly how it's transmitted."

What’s Beyond PCOS and Infertility Awareness?

Government agencies including the NIH, NICHD (National Institute of Health and Human Development) and CDC (Center for Disease Control) need to accept PCOS as a significant health concern and award grants for research that can reveal the cause of PCOS, the connection between PCOS and genetic code.

How PCOS can express itself differently, depending on the woman. Does it get turned on? Lay dormant until it does? How or why, for some women, is it able to be controlled by diet and exercise while other women gain 30 pounds in a month? How much do androgens play a part?

PCOS is considered an epidemic, as up to 25% of women in countries like India and 21% of women worldwide may be affected. This syndrome, along with many health challenges, starts with young girls as early as age 11 and is a lifelong problem that exists way beyond menopause.

We understand that there are many vitally important issues being faced in Washington DC right now. We also understand that women’s health, and specifically PCOS, has been sorely neglected. It’s time for that to change. Ask your legislator (Senator or Congressperson- find them here) to sign the resolution for PCOS Awareness Month.

Then go further and ask them for funding. Awareness is based on education, hearing what PCOS is about, then educating others to go further. It's the right time for funding to be allocated for PCOS. Write. Call. 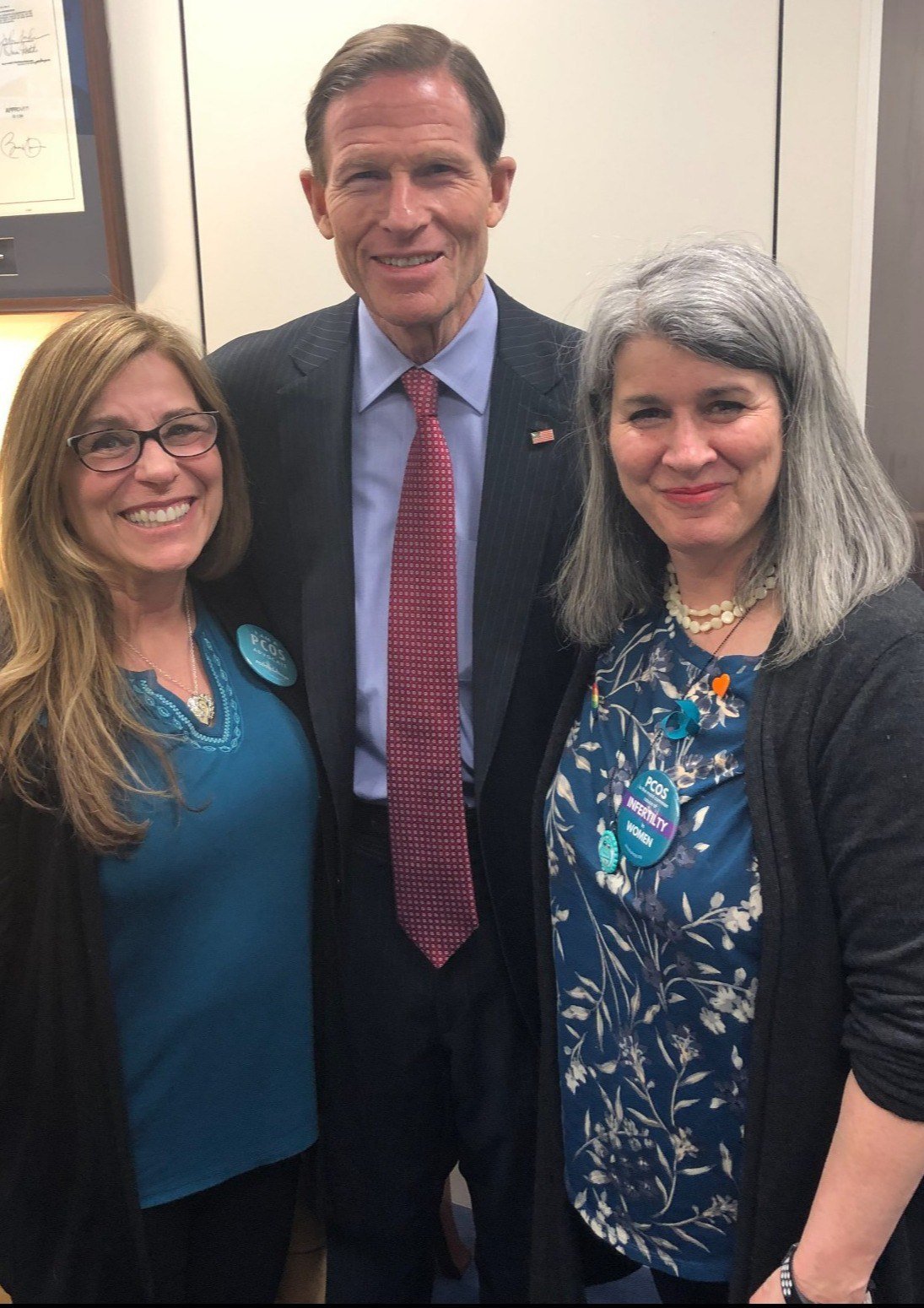 Ashley Levinson (AKA @PCOSgurl) has worked diligently within the PCOS community for over 20 years, advocating for increased funding, research and awareness for Polycystic Ovary Syndrome.

Fertility Consultation Guide | What to Expect, Next Steps & FAQs

8 Ways to Protect Your Mental Health During the Holidays

Can STIs Affect My Fertility? Here's What to Know

What is the Difference Between Primary and Secondary Infertility?

Supporting Black Women With Infertility: Organizations You Need to Know

An Open Letter to Fertility Warriors on Mother’s Day

From a Fertility Nurse: 5 Truths About Infertility You Need to Know

Is Your April Fool's Day Joke Offensive to Those with Infertility?

Fertility Superhero: Why Aprill Lane Decided to Donate Her Uterus

Reconnecting With The Universe- And Myself

Infertility Freeze? Tips to Transition from IUI to IVF

Grief and Infertility: Ways to Help Those You Love Cope

Beyond the White Coat

Finding Balance Throughout The Seasons